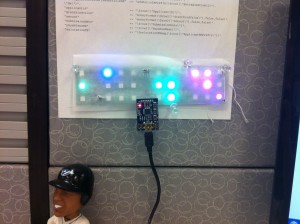 What is it? The ColourGrid clock is my version of the TIX Clock, except done with RGB LEDs.

Where can I get the source code? Source code is available at our BitBucket repository, at http://code.surrealitylabs.com/colourgrid-clock.

Where can I get one? You can’t, unfortunately - I only made one, and it was enough trouble (I’m not a fan of my own design here) that I don’t want to make another.

You can, however, build one of your own.

How do I build my own? I don’t suggest you do - the design on this one is definitely lacking, and the footprint on the LEDs is off by enough to make those difficult to mount. I’m thinking of doing another version at some point, but probably won’t.

The way I wired up the LED drivers is also just stupid.

How does it work? I haven’t written that up, yet - hopefully soon.